A WHIFF OF CYANIDE … Between the covers 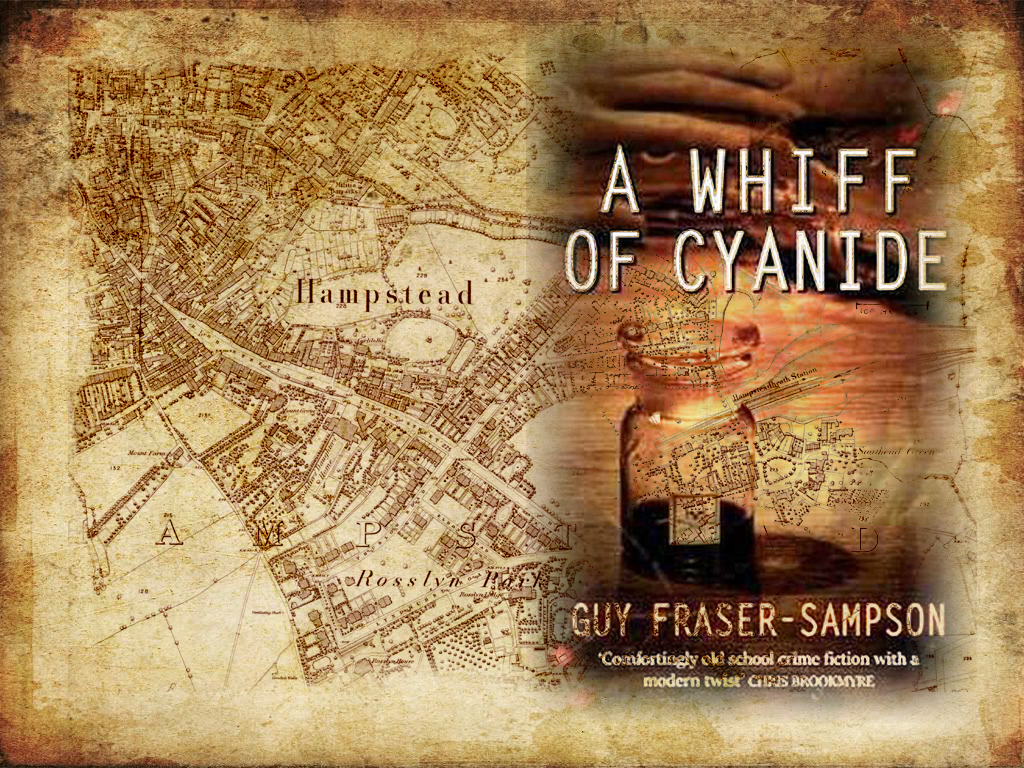 Readers of the two previous books in the Hampstead Murders series, Death In Profile and Miss Christie Regrets, will know what to expect, but for readers new to the novels here is a Bluffers’ Guide. The stories are set in modern day Hampstead, a very select and expensive district of London. The police officers involved are, principally, Detective Superintendent Simon Collison, a civilised and gentlemanly type who, despite his charm and urbanity, is reluctant to climb the promotion ladder which is presented to him. Detective Sergeant Karen Willis is, likewise, of finishing school material, but also a very good copper with – as we are often reminded – legs to die for. She is in love, but not exclusively, with Detective Inspector Bob Metcalfe, a decent sort with a heart of gold. If he were operating back in the Bulldog Drummond era he would certainly have a lantern jaw and blue eyes that could be steely, or twinkle with kindness as circumstances dictate.

Not a police officer as such, but frequently the giver of expert advice is Dr Peter Collins, who is le troisième in the ménage of which Karen Willis and Bob Metcalfe make up le premier and le deuxième. In another era, Collins would be described as ‘highly strung’. His sensitivities sometimes lead him to believe that he is Lord Peter Wimsey – and that Willis is Harriet Vane – but this eccentricity aside, he frequently has insights into murder cases which remain hidden to his more workaday colleagues.

The plot? With such delightful characters, it is almost a case of “who cares?”, but we do have an intriguing story. At a crime writers’ convention in a London hotel the Dowager Duchess of English crime novels, Ann Durham, is far from happy. For the first time in recent memory, her position as Chair of The Crime Writers’ Association is being challenged – disgracefully, she feels – by upstarts who have been churlish enough to ask for a democratic vote.

As the luminaries assemble for pre-dinner drinks, Durham takes an elegant sip of her gin and tonic, utters a dramatic shriek – and falls down dead. Peter Collins is a dinner guest, due to his authorship of a forthcoming book on The Golden Age of Crime Fiction. His partner for the evening is, naturally, Karen Willis, and with Ann Durham lying dead on the floor, her police training kicks in and she soon has the scene secured.

Collison, Metcalfe, Willis and Collins have an ever lengthening list of questions to be answered. Why was Ann Durham brandishing a bottle of cyanide as she presided over one of the convention panels? Who actually wrote her most popular – and best selling – series of novels? Fraser-Sampson (right) spins a beautiful yarn here, with regular nods to The Golden Age during a convincing account of modern police procedure. Not only is the crime eventually solved, but he provides us with a delightful solution to the Willis – Metcalfe – Collins love triangle.

Not the least of the many delights to be found in this novel is the author’s sardonic wit. His take on the whole crime writers’ festival ambience will strike a chord with many who attend such events. He arranges several distinct characters on his canvas: busy PR types – perhaps upper class gels with a humanities degree – bob and weave among the notables, gushing about this and that; we have La Grande Dame, the celebrated author with millions in the bank who disdains to rub shoulders with the hoi poloi; she is drawn in stark contrast with writers who are hungry for success and are only too happy to meet and greet the punters if it will sell a few books. Fraser-Sampson fires one or two deadly accurate arrows, but my favourite was this barb from one of the characters:

“I expect half the writers of this Nordic Noir stuff actually have names like Smith or Higginbotham and live in ghastly places like Watford or Cleethorpes. Publishers are funny like that, you see ……. if you can tick the Nordic Noir box, they know exactly which neat little compartment to fit you into and in all their marketing blurb they can call you the next Jo Nesbo.”

Some people might view books like this as a guilty pleasure, but guess what? I loved every page of it, and I sleep soundly at night with not even a wisp of guilt to darken my contentment. A Whiff of Cyanide is published by Urbane Publications, and you can check purchase options here. While you are in the mood, why not read our review of an earlier novel in the series, Miss Christie Regrets