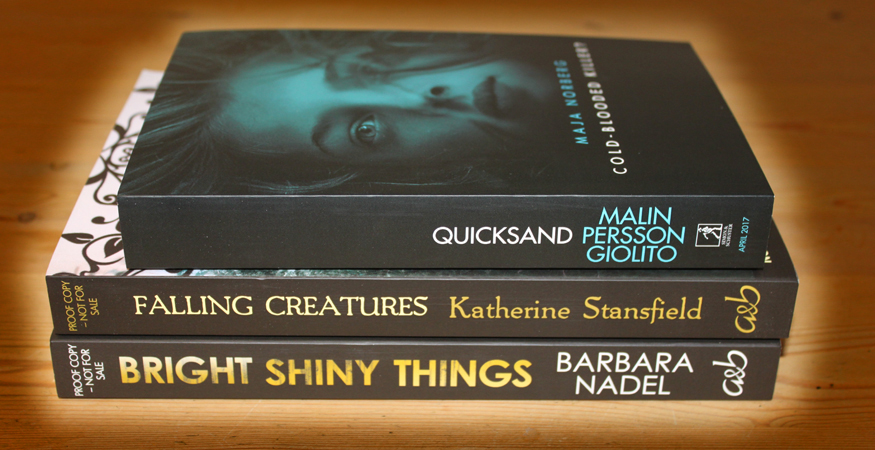 With due apology to the wonderful Andrew Marvell and his timeless poem To His Coy Mistress, (surely the best collection of chat-up lines ever penned) I have this to say;

Had I but world enough and time,
This reading pile would be no crime.
I would sit down, and think which way
To read, and pass my idle day.

The fascinating books just keep on coming, and the latest batch are all too typical of the amazing quality and variety of crime fiction books which are out there, just waiting to be read.

With a father, Leif Gustav Willy Persson a Swedish criminologist and novelist who was a professor in criminology at the Swedish National Police Board, it is hardly surprising that Malin Persson Giolito should be drawn to the world of crime. Not only is she a lawyer, but has a growing reputation as a writer of crime fiction. Her latest novel, Quicksand, will be released in March/April of this year. Published by Simon & Schuster and translated by Rachel Willson-Broyles, Quicksand is the story of Maja Norberg, a teenage girl who has been caught up in one of the worst crimes in recent Swedish history. She has been, in turn, vilified and championed by the mainstream media, but now she is to have her hour – and more – in court. Is she a cold-blooded killer, or a demonised victim of an unspeakable evil?
Quicksand is available for pre-order in all formats.

Her series of novels featuring private investigator and ex-soldier Lee Arnold and his assistant Mumtaz Hakim, of which this is the latest has, apart from being excellent thrillers, tackled head-on the sometimes thorny questions surrounding the role of Muslim professional women in the UK’s largely secular society.

Bright Shiny Things couldn’t be more topical. With suspicions of Islamic radicalisation sparking along East London’s Brick Lane like a gunpowder fuse, and Turkey’s border with Syria being one of the most dangerous places in the world, Hakim and Arnold undertake a mission to trace the son of an old military contact of Arnold’s. Has Fayyad al’Barri renounced his family values and thrown in his lot with ISIS, or is the boy a victim of something evan more sinister? Bright Shiny Things will be out in April, and you can pre-order here. 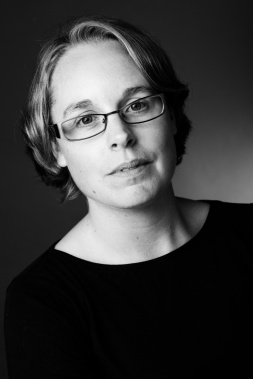 Falling Creatures by Katherine Stansfield will appeal to those who like a good period drama, a dead body or two, an atmospheric setting and a sense of Gothic looming over everything. 1844? Tick. Beautiful girl found with throat cut? Tick. Bodmin Moor, beloved of Arthur Conan Doyle and Daphne du Maurier? Tick. Mists, marshes and malevolent men? Tick. The author grew up on Bodmin Moor, and her debut novel The Visitor, won the Holyer an Gof Fiction Prize in 2014. You can find out more about the author (pictured left) by visiting her website katherinestansfield.blogspot.co.uk.  Due to be published in March by Alison and Busby,  Falling Creatures can be pre-ordered here . 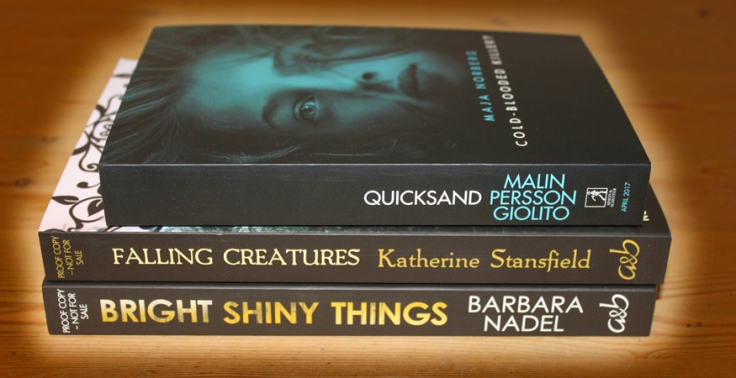