MURDER IN MT MARTHA … Between the covers 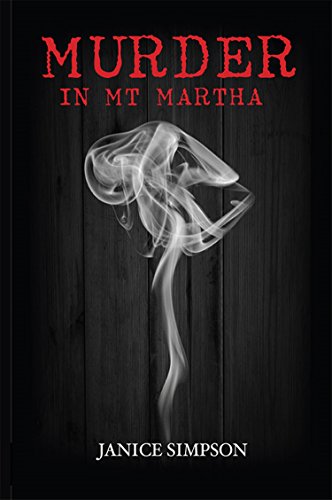 Some novels tread a well-worn path. The path is well-worn because it is safe, easy to follow, and will guarantee that the traveller arrives at his or her destination with the minimum of unnecessary effort. Crime fiction genres tend to operate like paths, with familiar landmarks and way points. Just occasionally a book comes along which jumps away from these genres and, in doing so, steps off the path and heads off into unknown territory.

Murder In Mt Martha is one such book. For those who have never visited Melbourne, Mount Martha is a town on the Mornington Peninsula, best known as what we Brits would call a seaside town. The ‘Mount’ is a shade over 500 ft, and is named after the wife of one of the early settlers. Author Janice Simpson (left)  has taken a real-life unsolved murder from the 1950s as one thread, and created another involving a present day post-grad student who is interviewing an old man about his early life in the post-war Victorian city. Simpson has woven the two threads together to create a fabric that shimmers, shocks and surprises.

Nick Szabo is a pleasantly feckless second-generation Australian, whose parents and grandparents were Hungarian. His source of anecdotes and atmosphere is the elderly Arthur Boyle. Arthur lives alone apart from his cat, and watches with a mixture of incomprehension and anger modern Melbourne streams past his window.

Simpson keeps Szabo blissfully unaware that Arthur Boyle is a relative of Ern Kavanagh. Arthur only recalls him in fits and starts, believing that he was his uncle, but Simpson lets us into the secret as she describes Ern’s life over half a century earlier. The book opens with a graphic description of the brutal murder of an innocent teenager whose parents have reluctantly allowed her to travel alone to her first party. There is never any doubt in our minds that Ern Kavanagh killed the girl, but we are kept on a knife-edge of not knowing if he will get away with the murder.

I have to declare an interest and say that I lived and worked in Melbourne back in the day, and so the minutiae of suburban life, particularly the way people spoke, the obsession with horse-racing and, of course, the ‘footy’, struck a chord with me. I would like to think, however, that readers who have never been within a thousand miles of Australia will be convinced and drawn in by Simpson’s superb writing.

Aside from the murder mystery, there is a beguiling sub-plot involving Szabo, his determinedly Hungarian grandmother, and a visitor from Budapest who may be about to turn on its head their conception about their family tree. Again, history is embedded in the narrative. In 1956, when Melbourne hosted the Olympic Games, there was international turmoil when 48 Hungarian athletes chose not to return home. ‘Home’ was, of course, suffering under the brutal Soviet repression of a national uprising against communist rule.

The writing is beautifully nuanced throughout. The dialogue, whether it is contemporary or taking place in a suburban 1950s kitchen, zings with authenticity. This is not a long novel, being just short of 300 pages, but it is one that hooked me in very quickly, and I was genuinely sad to reach the end. That being said, there are few crime novels whose structure and substance allow them to be read through again at a later date, but I suspect that is one such novel.

Without, I hope, spoiling the conclusion to this remarkable book, it might be said that justice was eventually done, albeit in a roundabout sort of way. But then again, the last hanging in the state of Victoria was in 1967; depending on one’s views of capital punishment, a convincing argument could be therefore made that justice was not only blind, but bereft of its other senses too.

Murder in Mt Martha is already published and is available here.